The Spurs are up one-game-to-none after beating the Denver Nuggets in Game One of the NBA Playoffs.

The Spurs led most of the game and went on to win 101 to 96. Five Spurs were in double-figures. DeMar DeRozan led the Spurs with 18 points and 12 rebounds. Derrick White added 16 points, Bryn Forbes and LaMarcus Aldridge each had 15, and Rudy Gay had 14.

Game 2 is on Tuesday night in Denver. The Spurs return to San Antonio for Game 3 on Thursday.

Photo: Demar DeRozan #10 of the San Antonio Spurs puts up a shot over Gary Harris #14 of the Denver Nuggets in the first quarter during game one of the first round of the NBA Playoffs at the Pepsi Center. (Getty Images) 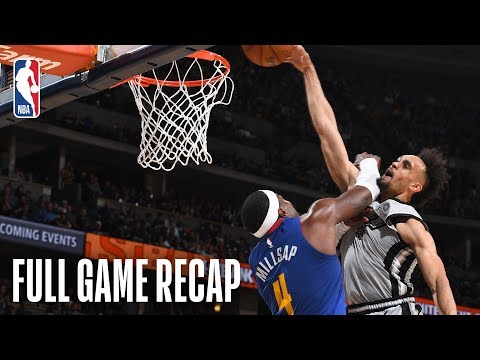 Highlights of the Spurs win over the Nuggets

The Spurs defeated the Nuggets, 101-96 in Denver to go up one-game-to-none in the NBA Playoffs.
10 months ago