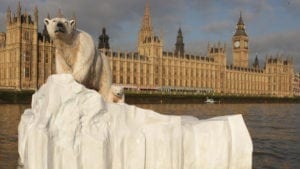 A new bombshell report from climate scientists around the world is throwing cold-water on the “worst case” scenarios predicted by environmentalists for decades, saying the left-wing hysteria surrounding “climate change” is simply “not credible.”

According to the AFP, scientists studying the impacts of greenhouse gases and human-made pollutants are drastically revising their predictions of mankind’s effects on global temperatures and sea level changes. Climate experts say new data now reduces the “possible end-of-century outcomes by more than half.”

“Earth’s surface will almost certainly not warm up four or five degrees Celsius by 2100, according to a study released Wednesday which, if correct, voids worst-case UN climate change predictions,” writes the AFP.

“Our study all but rules out very low and very high climate sensitivities,” said the lead author of the bombshell study.

“These scientists have produced a more accurate estimate of how the planet will respond to increasing CO2 levels,” said the director of the Priestley International Centre for Climate at the University of Leeds.

Global warming alarmists and left-wing activists have been scrambling in recent weeks to explain the sub-zero temperatures taking hold over all fifty states and beyond; falsely suggesting that the global cooling was somehow related to the global warming.

About The Sean Hannity Show