BUCK: The first Capitol Hill rioter — and it’s amazing. I mean, they use the term insurrection so much now, it’s in so many news stories and headlines that I worry that I’m gonna start to say it just from habit of reading it, not that I would ever declare this an insurrection. I was in the CIA. I know something about coups. This was not a coup.

And if a few people who were emotionally disturbed, who were present that day really believed they were going overthrow the government, then that’s an issue of their delusion and not describing this in reality. Some guy can push a shopping cart through time square saying the end is near tomorrow and that doesn’t mean that everybody should act like the world is ending, right? It doesn’t mean that you forget the rationality that you have to apply to situations like this. But they don’t want it to be rational.

In fact, they want, Clay, to make this a situation where anybody who speaks out against this, anybody who says this is severe. Eight months for effectively trespassing on the floor of the Senate during a riot, Democrats have, in 2020 alone, tried to burn down a federal courthouse, tried to burn down a historic church. I mean, did anyone get an eight month sentence for any of that? I mean the double standard of justice here is mind-blowing.

CLAY: That is, I think, the biggest take-away here, is we had months of riots all throughout the country. And, in fact, not only were there almost no punishments that came from any of those riots, but many of those people were not even charged with crimes after being arrested. They were let go. There was millions of dollars, probably tens of millions of dollars in what would have been bail to be able to put forward for anybody arrested during the middle of the riots. And in this particular incident, now everything is being prosecuted the fullest extent of the law.

Let me be clear. I said this when things were happening on June 6. I said, “Look. We got punish people who break the law.” That is one of the ultimate lessons of ways to drive crime down is when you collect and catch people who are breaking the law, punish them. But what creates a lack of trust and faith in the system is arbitrary punishment. Not punishment. It’s arbitrary punishment. And I think you can look at many of the results that are now coming down, compare them with the results from riots all through the summer, and this is now looking like politically motivated, completely different standards of punishment for behavior. 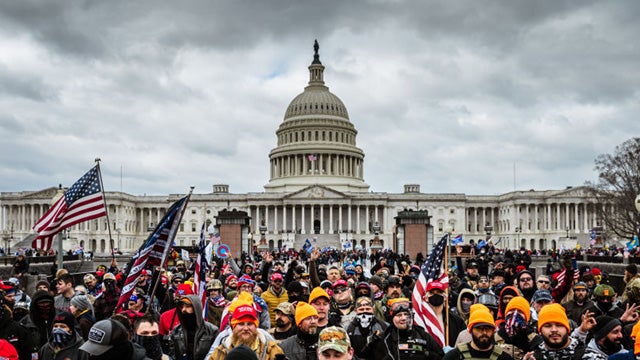 BUCK: I want to be very clear that they use — the system itself — uses some of the talking points that you’ll hear constantly on CNN or the New York Times or whatever. The “threat to democracy” claim is part of the enhancement here, is part of the justification for the severe sentence. Remember, this is not somebody who assaulted a police officer. This is not somebody who even destroyed property. This is somebody who was present and trespassed. And therefore was obstructing government administration. I believe the sentence that he could have gotten was — I mean, technically in the statute was 20 years, obstructing an official proceeding – to give you a sense of how insane federal law actually is.

But, Clay, this was in the filing: “He contributed to the collective threat to democracy.” This is Soviet-style propaganda in a courtroom, to throw somebody in a cell for 8 months.