RUSH: The media is still talking about President Trump's visit to California and the wildfires. And, of course, Gavin Newsom was filled with praise for President Trump in the meeting that they had, just like Chris Christie was filled with praise for Barack Obama in 2012. You remember how the media highlighted Chris Christie, the governor of New Jersey at the time, praising Obama to the hilt for the aid that he was offering after a natural disaster that had happened.

The comparison here is that the media is telling nobody about the praiseworthiness of President Trump out of the mouth of Gavin Newsom. But it just reminded me. Who was the first person to say that President Trump should go to California? Not to move the needle, but to show the flag. Now, I'm not saying he's taking my advice, don't misunderstand. But he went. He went to California, and he had substantive, serious meetings out there. And that, again, looked big time. It didn't look like small ball. 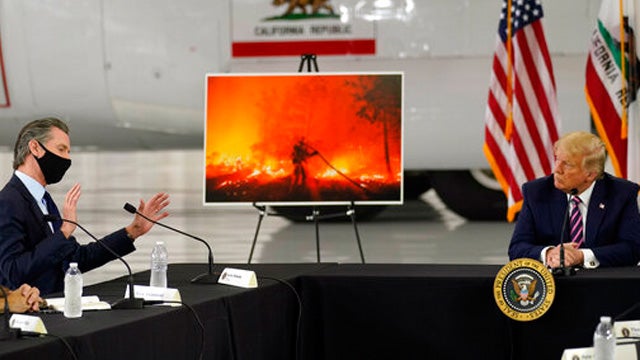 And clearly the people in California that he met with were happy to have him out there and to be able to talk about the wildfires and the damage that has been done. I think it's a good thing. I think it's a great thing that Trump went to California just to remind everybody that he is the president of the entire country, even the crazy parts. That he does not ignore the parts that are steadfastly opposed to him. I thought it was a really, really smart move.