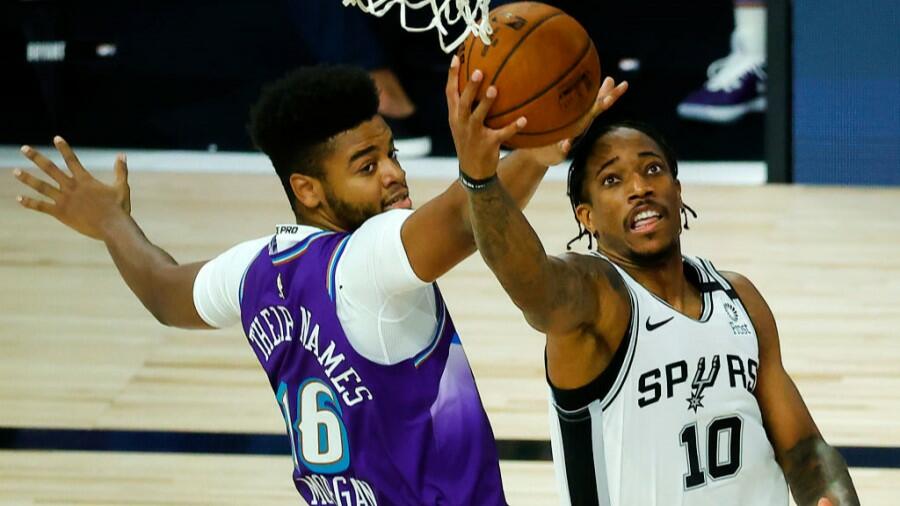 The San Antonio Spurs picked up a big win defeating the Utah Jazz 119-111 this afternoon.

Derrick White led the team with 24 points. Jakob Poeltl had 19, while Rudy Gay and Lonnie Walker IV had 14 points. DeMar DeRozan had 13 and Dejounte Murray had 12.

(On what he likes from playing different rotations…)

“I think they’ve come along very well, especially like Derrick [White] and DJ [Dejounte Murray] playing together. We get to see Lonnie [Walker IV] playing more minutes, figuring out how to play basketball with his teammates. You see somebody like Keldon Johnson getting time and getting out on the court. That’s all great.”

“I don’t think it’s slowing down for him yet. He’s really understanding more every three or four games. He probably understands more about what we’re saying to him. He’s got such speed he probably feels like he can beat everybody, and that’s not a bad thing. You want him to keep his competitiveness and his confidence. It’s just learning situations and time and the score. Who’s on the court with him and where are the shooters. Like today, he relocated really well. He drove it. He kicked it. Relocating, he looked like Steph Curry running to the corner. He hit that open shot and it came right back to him and he knocked down a three. He’s starting to figure things out.”

“I mean we all like each other and we all get along. We all want the best for each other. When we’re out there, we’re just trying to get the best shots for the team. Everybody sticking to their strengths. Jakob [Poeltl] was huge for us today. DeMar [DeRozan] probably sets the tone for us all, just getting everybody involved, getting a lot of attention. From top to bottom, just playing hard, playing the right way and doing the right things.”

“I’ve learned so much. The first time I got here, Pop just pulled me aside trying to get me to believe in myself. First and for most, it’s that. Hearing it from probably the greatest coach of all time, it definitely gives you a big confidence boost. Just little things on the court that I’m going to continue to learn from and try to make my game the best that it can be.”

(On different lineups in the bubble…)

“It’s going well, honestly. There’s a lot of different lineups out there that we really haven’t played much, really ever. I think we’re continuing to improve every game and it’s getting better every game. We’re still trying to learn and hopefully we’ll get it together to make the playoffs soon.”

(On watching the NBA standing…)

“For me personally, I don’t think it changes to much. At the end of the day, we can’t control what they’re doing. We can only control what we’re doing. We’re going to take every game as it comes. We’re going to try to win every game. Obviously, some close games like the last couple hurt, but we came back tonight and hope we can win some more games. We have to show the same energy against the Pelicans next game.”