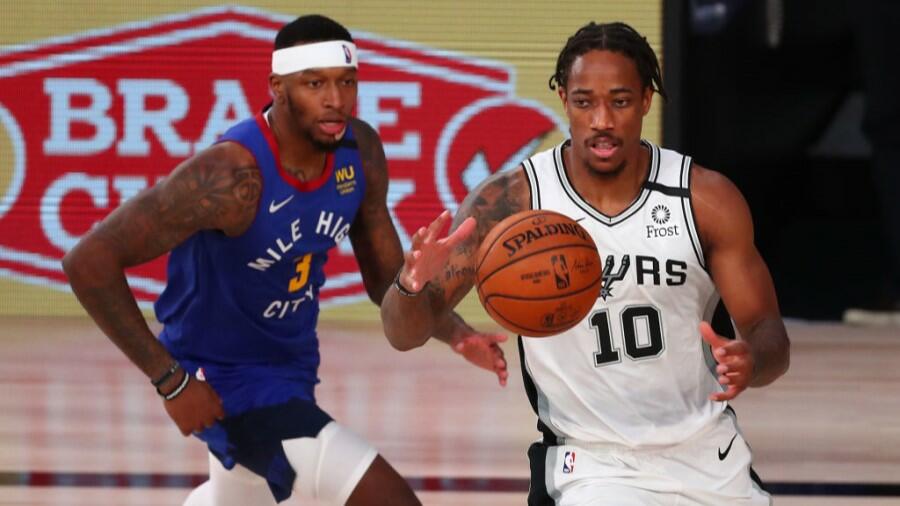 Here were comments from coaches and players after the game:

“He’s a fine young talent and Jokic, he’s like a reincarnation of Larry Bird. He does everything. He’s amazing. They were great.”

(On how important these four games have been for Keldon Johnson…)

“I think so. Players develop with minutes for sure, and he’s worked hard. The opportunity came and he’s certainly taken advantage of it. He’s done a really good job.”

(On Drew Eubanks finding his role in Orlando…)

“Well absolutely. He’s one of those guys, he knows his role. He doesn’t try to do what he can’t. It’s just a matter of playing. He started a little bit late. He’s just learning how to play the game. See what else is going on on the floor, he’s finding outs. He’s done a good job.”

(On what the team needs to improve…)

“Well it’s basketball, there’s all kinds of things. The other team scores, you score, and both teams score over 100 points, so there’s a lot of mistakes made, right. There’s always things to clean up. The team that wins the championship will look at film and have a lot of things to clean up. Everybody’s going to turn it over, miss shots, get back door, not block out, it’s all the same stuff. It’s not that difficult.”

“This whole approach is all about them. It’s for them to be able to play meaningful games, develop the way that we believe they can grow into and the potential they have to be able to get better every game. So look, two losses in the row, obviously is the result, but I think we’re playing good basketball. The style that we’re playing is good and guys are getting better. For me it’s big picture. It’s not great to say after a loss because you always want to win, but when you understand where we were, where we’re going and the process that we’re taking and where we’re trying to be, we’re doing well. And this group is being put together to be able to go out there and get the job done with what we have. It’s a process and everyone understands that process. When you do understand that, it’s about growing, it’s about learning and everyone has to go through it. This is a great chance for them to do that.”

(On how the NBA bubble has been successful…)

“Well, following protocols. I think it’s a number of things. The NBA has really done a good job and I’m not just saying that. I’m one of the guys who had questions and concerns about the whole thing. But testing regularly, obviously. Masks number one. And then all the little things about keeping things sanitized and clean and healthy. It’s a very comprehensive approach and I can imagine how much work goes into keeping it that way. It’s allowed us to get back on the court every day and get the NBA back up and going again. It’s great news. It’s great to hear. Being inside of the bubble, it seems like it’s a safe place to be right now. I don’t know all the complaints about going into the bubble and what’s going on outside of it, but it’s probably the safest place to be right now.”

(On Jakob Poeltl battling as a lone big man...)

“This is the perfect situation for Jakob and for the other guys too. To be able to be thrown in the fire so to speak. To be able to learn on the fly. This is what these few weeks were always going to be about, development and meaningful things as well. I think it’s great. I think Jakob is going to come out of these few weeks a much better player and if he can implement that into the future, this is what it’s all about. And the same goes for the other guys and they’re doing such a great job. Obviously, the last two games resulted in losses, but we’ve come a long way. We’ve come a long way and especially the young guys. It’s that mindset and big picture stuff as well. Jakob is doing a great job and being able to come out each and every night and defend different guys.”

“It gets the stop, so that’s always huge. Gets him the foul, might put them in foul trouble or whatever it might be. As long as it gets us a stop, it’s a really big thing for us.”

(On how Keldon Johnson has been shooting…)

“Every game I feel like we say something great about Keldon. He just loves basketball, brings the energy and plays hard. He’s open, he knocks down the shot. I mean he just does the right thing and he’s going to get better each time.”

(On how DeMar DeRozan helps facilitate on the floor…)

“He does that all year long, just finding us. He gets a lot of attention, especially when he’s driving. He has the ability to jump, find the open guy and put us in a good position. It’s always helpful to have a guy like that and he always gives us good looks and does it often.”