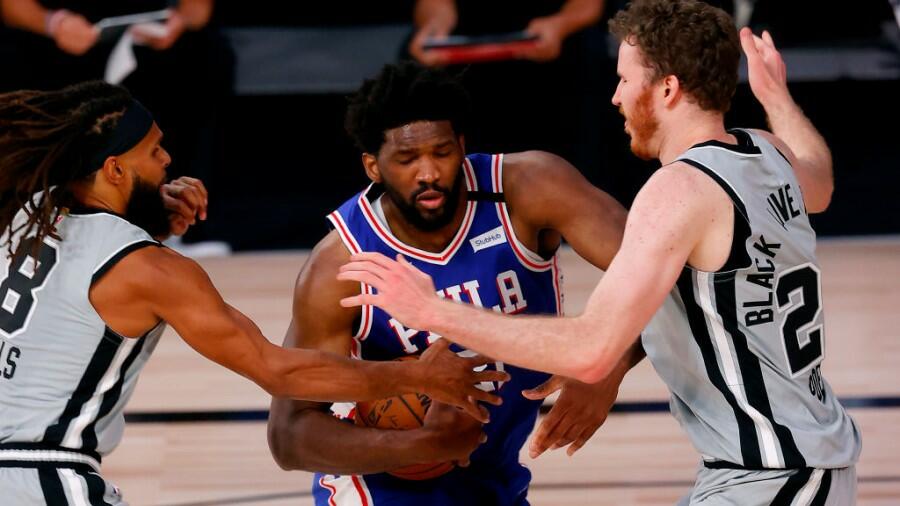 Shake Milton nailed the go-ahead three-pointer in the final seconds as the 76ers clipped the Spurs 132-130 in the NBA bubble in Orlando. Joel Embiidkeyed Philadelphia with 27 points and Tobias Harris added 25. The Sixers blew a double-digit, fourth-quarter lead but were able to still pull out the win. DeMar DeRozan piled up 30 points for San Antonio in defeat. Rudy Gay scored 24 off the bench.

Here was some of the reaction after the game:

(On how the team responded in the second half…)

“Well with three starters out and three games in four nights, I thought we did a hell of a job. I thought we responded wonderfully.”

“We’re fighting to get in the playoffs, so it stings a lot. The young guys got to play a lot and that’s good too, so both notions are true.”

(On what he thought about Keldon Johnson…)

“Same thing he does every game. He’s a monster competitor, learning more every day, getting confidence in shooting, he grinds it well. He hits the board and plays hard on D. He’s a fine young player.”

“We’re resilient. We’re not going to go out there and just let teams try to beat up on us or think we’re just an easy push over. We’re here for a reason. We’re here to compete no matter who we have, young guys, older guys, whoever. Guys have been doing a great job stepping up, taking on the challenge. We’ve been going out there trying to compete for 48 minutes.”

(On how he stayed in shape during the hiatus…)

“We look at everybody the same, honestly. No matter who we lineup out there against, we’re going to compete. We don’t look at nobody like they’re superior. Everybody out there is a basketball team like us, and we go out there and take on the challenge, no matter who we’re playing.”

(On any positive takeaways…)

“Everybody’s sick to their stomach. We fought so hard and we had the game in our hands so at the end of the day that’s all we can do. You got to take the positive out of it, show that we fought and fought. And get ready for Denver.”

(On how this game impacted the younger player’s development…)

“I think every game we play here is important for all of our development and the chemistry and everything. Tonight we fought a back-to-back, three games in four nights, but that’s not an excuse for what happened. We went out and fought, and we lost.”