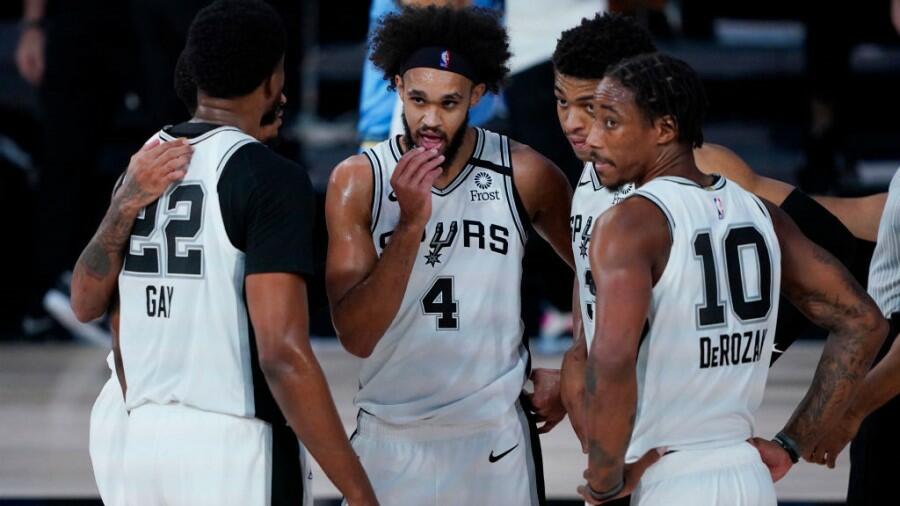 The Spurs are 2-0 on the restart of the season after defeating the Memphis Grizzlies on Sunday afternoon 108-106. The Spurs are back in action Monday night against the Philadelphia 76ers.

Here was some of the reaction after the Spurs victory over the Grizzlies:

(On how the Spurs played down the stretch…)

“Yeah, you always like it better when you win, but I don’t think we were probably as sharp as we were against Indiana [Pacers] and Sac [Sacramento Kings] our last two games, but we just kept playing. We went to the next play and that was the best part of the deal. We made it tough on ourselves in several different ways, but they kept playing and that’s most important.”

“Yeah that’s a great point. I actually am. They haven’t played together that much, and it’s been off and on because of injuries, that sort of thing during the last couple years. They’re having fun playing with each other. They give us great pace. They move the basketball. They feel responsible to each other so it’s a good mix.”

“That’s Drew’s game. He’s not going to be a go-to guy. He doesn’t shoot threes so what’s left? You better set picks. You better run the floor. You better play ‘D’. You better rebound or you don’t play. He knows his role and does a great job at it.”

(On what he expected from the league during the restart…)

“In all honestly, it’s better than I was expecting. As you said talking about all the teams in general. Everybody is much crisper. They look more in rhythm than I ever expected teams would be. Whether it’s the best team with the highest seed or other people like us who are just trying to get into the playoffs, everybody’s a lot sharper than I would have expected.”

(On what he enjoys about the playoff chase…)

“I’m just enjoying going out to compete with my teammates and trying to make something happen. Obviously, a lot of people count us out not having a bunch of our guys, but at the end of the day, we’re all pros and it’s next man up leads and he has to be ready to go.”

(On the value of having fun with his teammates…)

“Yeah, to started it off, we like each other off the floor and I think that’s big. You have to build chemistry off the floor before you build it on the floor. It’s not even just me, Derrick and Lonnie, the whole unit love each other, like each other and try to push each other so it translates to the court. You see we have fun and we want the best for one another.”

(On the starting unit…)

“It’s been fun. We all like each other. We all get along off the court and that makes it good when we play well together on the court. We want the best for each other, and we keep pushing each other to be as good as we can be.”

(On Dejounte Murray’s success this season after his injury…)

“Everybody knows how hard he works. How bad he wants to be really good in this league. He made big shots for us, big pull-ups, a big three in the corner to give us a little separation. He puts in the work and it’s nice to see that pay off here in the games.”

(On being in a better playoff position…)

“We’re just going to keep doing what we’re doing. When we came in, we had a lot of confidence in the group we had. Just keep playing, try to get better each time we’re out there. That doesn’t really change much for us. We still have a lot of work to do to get to the playoffs.”

(On playing his first game in Orlando tonight…)

“It’s obviously a unique circumstance here. The approach to be able to develop our young guys, give them the opportunity to be able to play meaningful minutes and develop them as much as we can. We’re always about the big picture and where we want to grow. This is a great opportunity for that, meaningful games, meaningful minutes. In such a short time we see the growth of our young guys. With my position and where I can help these young guys develop is going to be any part of that. Whether I’m on the court or not. I think the value of me being able to still continue to develop and help these young guys and help them grow is obviously on the court. So, it’s good to get out there with them today and a big win. From my standpoint, the biggest thing is honestly seeing these young guys and the opportunity that they’ve had to be able to take it with both hands and really grow.”

(On the team’s playoff spot…)

“Yeah, a hundred percent. When everyone understands that mindset and that approach, you come together because you understand the big picture, I guess. The big picture is that we’re in this transition period. And it’s always going to be the next generation, so putting the time and effort and energy into helping develop those guys is important. But, on their end, they’ve got the right mental ability to be able to make the most out of this opportunity. They work hard on the floor. They work hard in the gym. They look after their bodies. It’s a great environment that we have at the Spurs to be able to develop them.”