The Spurs restarted their season with a big win in Orlando on Friday night, beating the Kings 129 to 120.

"I think the good thing about all of us is that we're unselfish and we want the best for each other. That goes a long way," said Derrick White. White had 26 points in the game on offense and drew 5 charges in a strong defensive game.

The Spurs play the Memphis Grizzlies on Sunday.

“He’s sure come a long way hasn’t he. He’s turning into an all-around player. As we’ve said for a couple years now, it’s all about his confidence level and obviously it’s growing. He’s expanded his game. He’s one of our top defenders maybe even the top defender. He contests threes. He takes charges. He’s really developed into a fine player. Really pleased for him.”

(On how effective the bench played…)

“I thought they were brilliant. We got three starters that are out and Patty [Mills] our sixth man, so that tells you what those guys did. They picked it out. They covered for everybody. The young guys like Quinndary [Weatherspoon] and Keldon [Johnson] are learning quickly. Obviously DeMar [DeRozan] and Rudy [Gay] were really good providing core scoring and the leadership to make a lot of things happen. I think at one point DeMar had 12 assists or 10 assists, whatever it was. All in all, a lot of people stepped up with those guys all out. So, they should enjoy this tonight. Enjoy it in the morning and then forget about it and get ready for the next one.”

“I mean, the mask comes in handy right now so you can’t see it, but a chipped tooth is nothing compared to what’s going on right now in society. So, I’m thankful to be here living still, some people haven’t got that opportunity.”

“Yeah, I mean that was the goal. Win them all. Every time we try to go out here and compete, play hard and hopefully good things happen for us.”

(On his performance tonight…)

“Just playing my game. Be aggressive. That’s pretty much what my mindset was going into this game. I’m blessed to be able to play a game of basketball. I just wanted to go out there and I had Elijah McClain on my shoes, so I wanted to show out well for him and his family because he obviously unjustly died so just go out there and complete. Have fun playing the game I love and give it my all.”

(On Derrick White competing on both ends of the floor tonight…)

(On finding balance in the fourth quarter…)

“Just me reading the game. I always tell myself don’t get frustrated if I don’t get many shots that I like. I’ll always do other things like trying to get other guys involved, kind of get them a rhythm. I knew my rhythm would come once I got to the free throw line, got a layup or something. I knew it was going to come especially in the fourth quarter.”

(On playing with a young group...)

“It’s definitely fun. They make me feel old, but they keep me young. Going out there and just seeing those guys competing, trying, understanding when they do make mistakes, it’s about effort out front. Just trying to help them the best way I can and try to lead them throughout the process.” 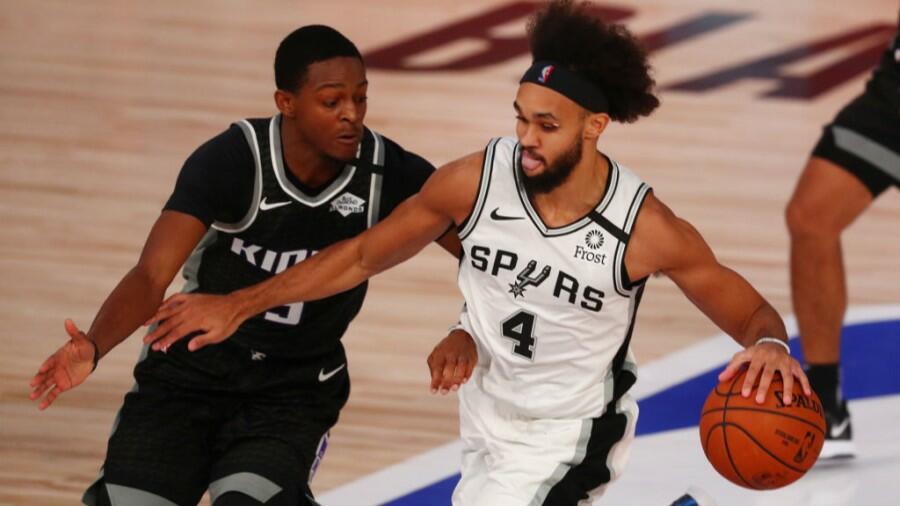 Derrick White #4 of the San Antonio Spurs is defended by De'Aaron Fox #5 of the Sacramento Kings in the first half of an NBA basketball game at the Visa Athletic Center in the ESPN Wide World Of Sports Complex in Lake Buena Vista, Florida. (Getty Images)