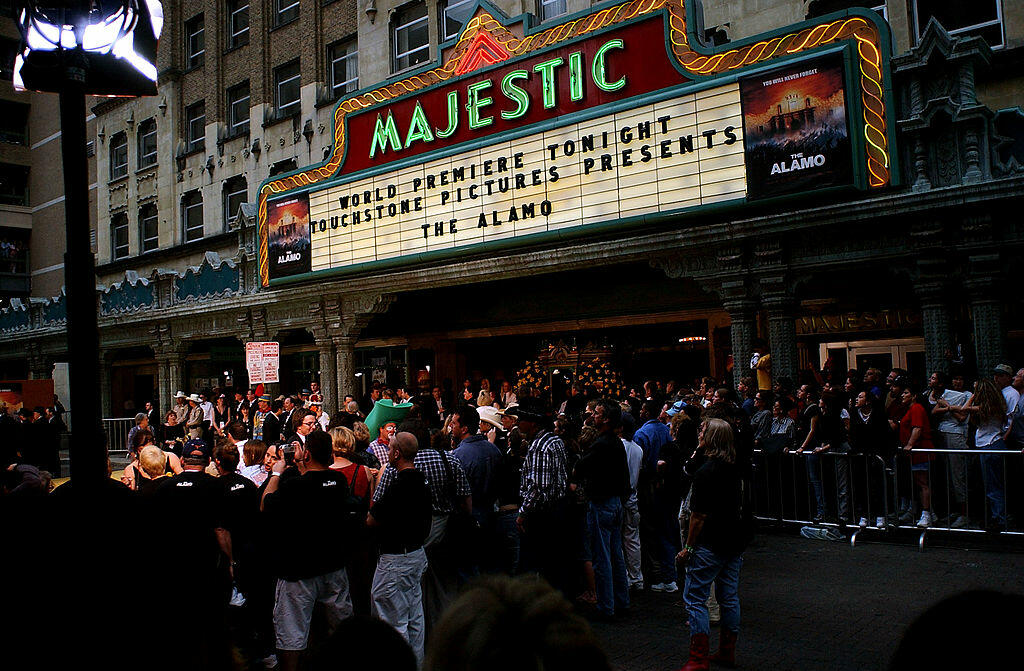 San Antonio's Majestic Theater first opened its ornate doors to the public 90 years ago this month, and the Houston Street landmark will celebrate with a lunch time celebration and a proclamation from downtown Councilman Roberto Trevino, News Radio 1200 WOAI reports.

The Majestic, which was the first wholly air conditioned movie theater in Texas when it opened in June of 1929, featured 'The Follies of 1929' as its opening feature.

The Majestic, with its 3700 seats, was the largest movie palace in Texas when it opened, and the second largest in the country. It is the best surviving example of what was known at the time as an 'atmospheric theater.' That included having the finest audio and projection equipment of the day, and providing an 'outdoor' atmosphere for movie goers.

It was a theater truly worthy of its name, from the star lit blue vaulted ceiling (National Geographic was consulted to make sure the stars were in their real locations in the sky) to the faux birds and trees to the castle and arch decorations which brought to mind the fantasy of the movies.

Ironically, considering this was three months before the stock market crash ushered the Great Depression, the Majestic was opened as part of a city wide celebration called 'Prosperity Month.'

One of the first musical performances at the Majestic, taking advantage of the proscenium stage which accompanied the huge movie screen, was none other than the Father of Country Music, Jimmie Rodgers, who received, according to news coverage of the event, 17 curtain calls.

An evening at the Majestic in 1929, which would have included a feature film and several vaudeville attractions, wasn't cheap. The San Antonio Light promoted tickets for the first week, 90 years ago this month, at $10 per person, or about $125 in today's money.

Unusual among major 'society' venues of the time in the states of the Old Confederacy, the Majestic featured African American acts on its stage, with one of the favorites being Harlem jazz singer Cab Calloway, who made several appearances in the 1930s. This was at the same time when blues pioneer Robert Johnson was not allowed to stay at the Gunter Hotel right across the street when he was recording his classic 'Crossroads' at a studio set up in the hotel.

It was not unusual for the Majestic, due to its size and full stage, to host musical acts in conjunction with films right into the 1950s. The classic group 'Sons of the Pioneers' appeared on the Majestic stage before a showing of the 1950 Ward Bond western "Wagon Master." Jimmy Stewart stood on the Majestic stage to introduce his 1955 film 'The Man From Laramie.' That was the same year that Texan Audie Murphy rode a horse down Houston Street to attend the world premiere of his personal story of World War II, 'To Hell and Back.'

The Majestic fell victim to the dawn of the mall megaplex era in 1974, when it closed its doors. The subject of numerous city discussions about what should become of the venerable theater, it was finally reopened in 1989, thanks to the Las Casas Foundation, as the home of the San Antonio Symphony, which performed the music of Beethoven and Mozart under its starlit dome until the opening of the Tobin Center in 2015.

The Majestic remains a 'majestic' venue today, recently hosting the San Antonio premiere of the hit musical 'Hamilton.' Singers ranging from Michael McDonald to Lyle Lovett and comedian George Lopez are among the superstars who will grace the 90 year old boards of the Majestic stage this summer.